Wildman at the Castle 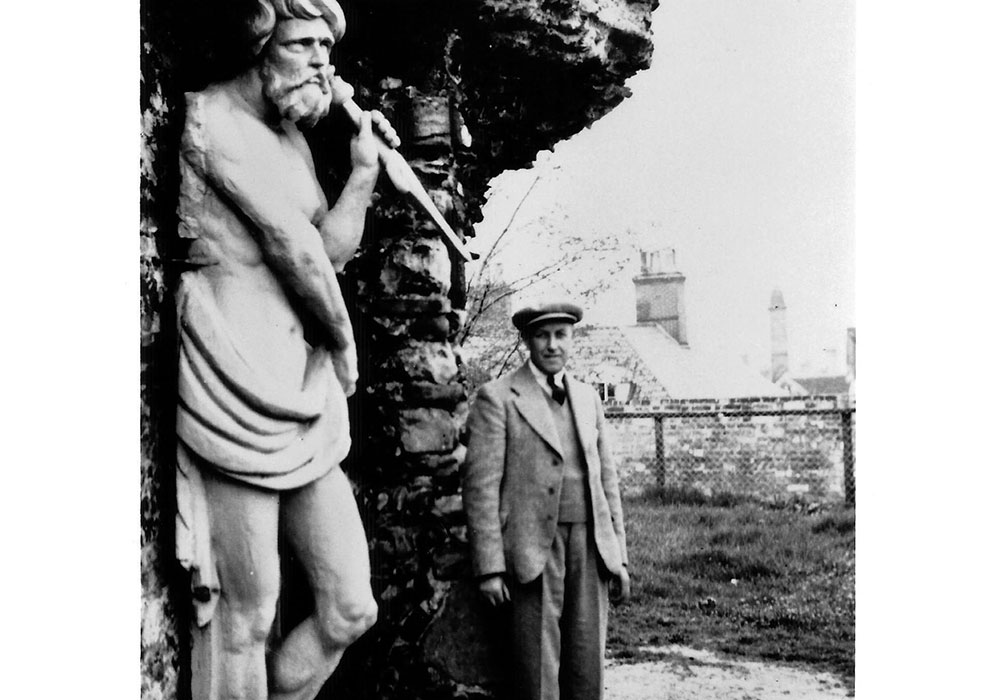 Our ancient Norman Castle is attracting renewed interest, now that the King’s Head site has been purchased by the Castle Trust to provide access to the Castle keep from the Oddfellows Hall in the yard. Plans are being discussed to renovate and improve the site as a tourist attraction, and grants are being applied for from the Heritage Lottery Fund.

The last time that any major work was organised at the Castle was in 1933 – 34, when the Town Reeve, Dr. Leonard Cane, employed an architect, Hugh Braun, to oversee extensive excavations. A number of local men, unemployed during the 1930’s ‘Depression’, were hired for manual labour which involved digging and shifting tons of earth in order to reveal long buried features of the ancient fabric.

The photographs of work in progress include images of a carved wooden statue which for many years stood in a niche of the castle walls, overlooking the King’s Head yard. Its date and origin are unknown. A Wild Man figure, it stood about 12 ft. high, with shaggy hair and beard, wearing a loin-cloth and a tortured expression as if expecting an immanent spanking from that old bully, Hugh Bigod. It was in worn and damaged condition, but restoration was undertaken by Dr. Theodore Fisher of Flixton in September 1935. Meticulously repaired, and given a coat of paint, it was then restored to its former niche.

Unfortunately, it didn’t remain there for long. At the outbreak of War in 1939, it was decided to remove the statue of Justice from the Butter Cross, and the Wild Man from the castle to prevent any damage that might occur during enemy hostilities. Justice was placed in an underground shelter at Earsham, and survived the War unscathed. But the Wild Man was taken to Dr. Cane’s garden in Trinity Street, and it seems was not provided with adequate cover. His son Hugh reported that when it was examined after the War in 1946, it was so badly weathered it was quite beyond repair.

All we have to remember it by are the photos, but if anyone can provide further information, please email me at: kitkat46@btinternet.com

Perhaps as part of the improvements to the Heritage site, a replica of the Wild Man can be commissioned, so it can resume its original position as an attraction for school groups and tourists.