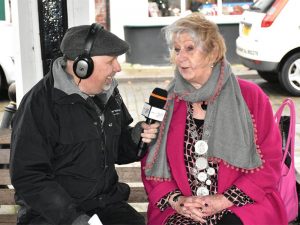 Until the formation of the Urban District Council in 1910 local government in Bungay was carried out by the Town Reeve and Feoffees, an ancient institution which has miraculously survived in spite of all attempts to legislate it out of existence.

The Town Reeve of Bungay is unique in the United Kingdom as the survivor of a Saxon civic authority though there is still an active Portreeve in Laugharen, south-west Wales, and Ashburton in Devon. The earliest surviving record of a Town Reeve in Bungay, William Brooke, appears in the St. Mary’s Churchwardens’ Book in 1536, now in the Suffolk Record Office. A complete series of Town Reeve biographies from 1725 to 1986, compiled from account books, has been published and is on sale in the town.

The Town Reeve today is nominated annually by the predecessor: no voting takes place and the name of the successor is kept secret until the handover of office at a public meeting in December.

The Feoffees, or Trustees, have existed at least since an existing Conveyance of 1639 which appointed ‘twentyfour of the most honest, discreet and sufficient inhabitants’ to administer certain charity lands for the benefit of the town.

To these original 24 are now added ten elected members of the Town Council and it is from this body that new Town Reeves are chosen. Until the late 19th century when County, Rural District and Parish Councils were formed, the Town Reeve and Feoffees were responsible for all public services; but when they became more sophisticated and extensive the income from town lands was insufficient, so most of their work was transferred to the new rate-supported councils.

Today the Town Reeve still owns and administers thirteen almshouses, the Butter Cross and Market, and the farm lands which were left in the past by wealthy benefactors to the Town Trust. Income is to some extent controlled by the Charity Commissioners but the Town Reeve has retained some traditional civic functions, is dignified by a robe and chain of office, and presides at the annual Town dinner at the end of the year.

For more information on this unique office, click on the button opposite to visit the Bungay Town Trust website.

Visit Website
History Navigation
Do you want to advertise on this site?